Our Grandfather, Walter Owen Marks, served in World War 1.  He  was a member of the 35th Battalion and was wounded during an attack at Messines.  Charlie and I wanted to trace his steps through France.

Dad had told us that he received a severe wound in the chest during a charge after they had blown up a hill.  Following through this piece of information we found that the closest explosion to his Battalion is now called Ultimo Crater created by one of the 21 subterranean mines placed under German lines.

We found the crater.  Granddad would have been wounded within a couple of 100 meters from here. 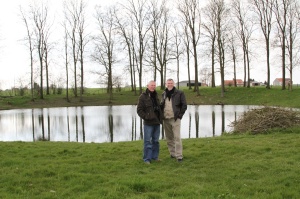 His record then shows 16 Dec 1917 Returned Unfit for service.

Walter was born in 1889 at Belmont New South Wales.  His parents had purchased land to the north of Belmont after selling what is currently Marks Point on Lake Macquarie to his brother Charles.

Walter volunteered during the First World War and was shipped to France.  It appears that he trained as a ranger for the machine guns.  He was critically wounded in the chest and shipped to Netley Hospital in England.  He recovered sufficiently to be shipped home and was discharged ‘unfit for service’.

He purchased land near a creek at Holgate, Gosford which he named Netley.  He married Ellen Jane Currell and had two sons, Owen and Andrew.  He farmed flowers and fruit there until, in his later years, selling the farm to one of the sons of his brother Charles.

Walter then moved to Valentine on Lake Macquarie.  He is buried at Cessnock with his wife.

Walter’s son Owen became a minister of religion in Queensland and Andrew an Electrical Engineer at BHP in Newcastle.